The Book of Tomorrow

This heavy, leather-bound tome has a thick leather-and-brass clasp holding it closed. From the sides, it appears the pages are fashioned from beaten brass. Inscribed on the front cover is a single Old Throalic rune. The book is very large, over a foot wide by a height half again that tall.

The threat of the Scourge forged the ancient Dwarf tribes into a single people, and this did more than any other single event to bring all of Barsaive’s disparate Namegivers together. The wisest heads among the Dwarfs (many of them in the kingdom of Throal) observed this new unity and saw a way to ensure that the culture of Barsaive survived the Scourge. These Dwarfs realized the Scourge would force the Therans to quit Barsaive for many centuries, but that Theran forces would return as soon as they dared. Determined that the Therans would find a different, stronger Barsaive awaiting them, the Dwarfs set about creating the Book of Tomorrow. That volume and the Throalic system of justice shaped the Barsaive that most modern Namegivers know; for this reason, the Dwarfs regard themselves as Barsaive’s fittest caretakers.

The written word is as sacred as life to Dwarfs, and it seems appropriate that the dwarfs’ greatest contribution to the survival of Barsaivians during the Scourge was the Book of Tomorrow. This volume, commissioned by King Varulus I of Throal shortly before the Scourge, began as a language primer and grew to include fables, legends, and pages upon pages of the practical information that dwarfs love to discover and set down. The book contains passages on house building, animal husbandry, gardening, various arts and crafts, and a variety of other valuable information, along with the one vital piece of magical knowledge the Therans had held back from the people of Barsaive: how to know when the Scourge was over.

In Barsaive, the Throalic dialect of the Dwarf tongue has become the common language since the Throalites distributed their Book of Tomorrow to kaers throughout the province. It often was the only book in the kaer, and while the peoples of Barsaive still learned to speak their race’s language, they often learned to read and write the Dwarf tongue only.

Save for Throal, all the Dwarf nations that existed before the Scourge have disappeared, remembered only by historians and in the pages of the Book of Tomorrow.

The Book of Tomorrow 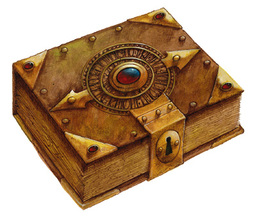