An extra bank of oars on the Fleet Cerena adds 1 point of speed at the cost of 3 duari of cargo space.

The Fleet Cerena (now Dashing Stag) most closely resembles a 17th century two-masted schooner, including rigged sails to the bowsprit. Most airships constructed in the Barsaive province are heavily influenced by Crystal Raider drakkars. The Fleet Cerena is the evolution of Travarian shipbuilding changing to take advantange of sail power.

Distinctions of the ship include full windows across the back of the captain’s cabin, two short (two-sail) equal-sized masts raked back, open side decks on the cargo level, pectoral sails and masts port and larboard, and heavy rigging above and below. Her red/yellow chequed sails have elemental air woven into the fabric. An Elementalist is needed to effect sail repair (half magic test TN 7, takes 1 hour per sail). But the elemental air makes them resistant to fire.

The top deck is open from bow to 3/4 of the length of the ship. The poop deck sits atop the captain’s cabin and stateroom, and the ship’s wheel is located there. Under those is the cargo hold, mid-deck, and officer quarters. Struts support stable platforms, as well as a single causeway down the center over the keel in the main cargo hold. The front half of the cargo hold is partitioned thusly:

The Fleet Cerena was built in the Travarian shipyards less than 5 years ago. She was commissioned by Omasu of the Overland Trade Company as a messenger vessel. An interesting choice of words for a civilian vessel that was built as a blockade runner.

Two years ago, the Fleet Cerena was attacked by Stoneclaw raiders when the ship sailed too close to the Twilight Peaks on a westerly bearing. Uncharacteristic for a ship with no armaments, the captain and crew fought like devils and died to a man. The captain’s log was not recovered. No cargo showed a value in proportion to the effort the crew put into the ship’s defense.

Now the Fleet Cerena has reappeared as the Dashing Stag, manned by Stoneclaw moot members and men of Konigsberg. Its sails have been dyed deep navy blue. It flies the flag of The Konigsberg Wolf above the main, forward mast. This flag is the provincial flag of Konigsberg and the ancestral flag of Stilicho Alaricson, the Ealdorman of Konigsberg, and has not changed since times dating back times long before the Scourge. It too is a deep navy blue with a silver wolfs head displayed in the center.

Below the flag Konigsberg Wolf on the main mast, flies the flag of the Stoneclaw Moot, which is traditionally flown below the symbol of the owner or commander of a Stoneclaw ship, which in this case is Stilicho. It can also be given to merchants or name-givers who have permission to fly unmolested through Stoneclaw territory, functioning as a flag of passage for them. The flag is universally recognized by Stoneclaw moot members, and can even be respected by other moots, such as some clans of the Swiftwind Moot. The symbol on this flag has represented the Stoneclaws since prior to the Scourge.

Flying high above the rear mast, is the bold flag of Ardor Zomay Skram, which was recently added to the mast per his request. Ardor is a Thane in the Kingdom of Throal, is the third officer on The Dashing Stag and one of The Unchained. This flag depicts his hammer, the Thunder of Uplandal, and is adorned with the symbol of The Unchained and a dragon, which symbolizes something only a few name-givers not on the Dashing Stag are aware of. 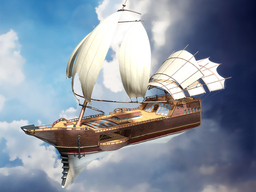