Urgral Ovgrin is a stout muscular Dwarf with weathered features and a close-cropped black beard, making him appear far older than his young years. His blue eyes burn with a fierce light, unnerving most Namegivers that he faces.

Urgral Ovgrin’s ancestral home lies in the foothills of the central Throal Mountains. His father and grandfather were settlers and gem miners. They dug out and lived in the upper reaches of their mining operation, and had built up a considerable amount of wealth and respectability. That was all ruined when a horrific monster trapped them in their own home and devoured them after driving them all mad.

Urgral, a young lad at the time, had been traveling with his older brother Ori to the markets in Bartertown and Throal. Returning from a prosperous trade expedition, Ori was the first to stumble upon the remains of his mother. Driven by grief, he left his brother with the caravan and went in search of the horror in the deeper mines, following a trail of carnage. On the night of the 2nd day, he came back to his brother, deformed, murdered, and reanimated as an undead monstrosity. Horrified and sickened, Urgral was nonetheless ready and was forced to cut down his brother.

The horror itself issued forth from the entrance to his familial home, a giant mass of undulating flesh and thick ropy tentacles with gibbering mouths calling his name in his mother’s voice. Urgral fled with one of the wagons back to Bartertown and used use what wealth remaining to him tracking down and later paying a Horror Stalker adept to train him in the art of hunting Horrors. He’s been tracking the murderer of his family ever since. 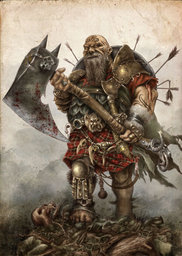