Dremnin is a human male, now 21 years old, stands 6 feet in height, weighs 180 pounds, has medium length, dark brown hair, green eyes and tanned skin. He is above average in appearance, with a kind and gentle face; a forgettable face that allows him to better blend into a crowd. His manner is generally light-hearted and humorous, with a quiet, introspective side that enjoys sunsets, as well as parties thrown by his close friend Skram, a Questor of Floranuus. Dremnin is right handed, and is an accomplished musician who favors the mandolin. He is most at home in the wilderness.

He has a largish body frame, and prefers dark green, grays and browns in his clothing. His clothing is made of fine materials and is of high quality, which acknowledges his patron Passion, Astendar, the Passion of Love, Music and Art. He also wears a simple, magic, full grey cloak and hood. The clasp and brooch are made from gold, with the brooch being in the shape of a leaf made from jade and the gold outlining the edges of the leaf. He carries a sturdy old haversack over his shoulder for keeping useful adventuring items close at hand.

His current role with the group is as navigator and helmsman for the air ship Dashing Stag.

The young scout also wears a pair of magical boots given to him by the King of Throal. These fine boots are made from the hide of espagra, the dragon-like, flying predators. Because of their origin, espagra boots are usually bright blue, interwoven with brown leather. The espagra scales also give the boots a brilliant luster, a trademark of espagra-skin products. Similar in appearance to espagra saddles, these boots are often worn by those whose work requires stealth, secrecy, and great agility.

The scout also wears a Saracen style helmet and has blood pebble armor imbedded on his body. Blood Pebbles are a form of living elemental armor. Hundreds of small elemental stones are embedded in the character’s skin, drawing power from the magic in his blood. These pebbles are not implanted on the head or neck.

Dremnin is further armed with Sidste Væg, an ancient dwarven round footman’s shield with a hammer emblazoned on it. It belonged to a pre-Scourge Dwarven Thane to the King of Throal and is a magical pattern item.

In addition, Dremnin has the Thane’s short sword, Sidste Flytte, which is also a magical pattern item. The blade is pattern-welded (bluish damascus), it has a short blocky crosshilt of a shiny bronzish alloy, with matching alloy on the pommel. The pommel is shaped like a pyramid, point down forming a short spike. Old Throalic runes on the hilt carry the meaning “protection”. The grip is some kind of dark stained hide, cracked somewhat. Covers the actual handle well enough that without unbinding the hide the actual handle is not visible. The scabbard is designed to belt at the waist for a cross-body draw and designed for a right-hander. The body of the scabbard is a lightweight metal alloy, pale – almost white – that displays no hammer marks. It is smooth and polished, though not reflective. More of the bronzish alloy bands it near the top and at the bottom tip. The runes indicate Derin’s ownership and family lineage.

As a last ditch weapon, Dremnin carries an ancient dagger and scabbard which came from the armory of the first Kaer he helped liberate from a Horror.

Rounding out the scout’s melee weapons and armor is a Scythan axe called the mareka. The mareka is a one-handed weapon featuring a single axehead. On the side opposite to the blade, the weapon has a small sharpened hook. The mareka shows the true pragmatism of the dwarfs of ancient Scytha, as the hook side can be used for climbing (the latter providing a +1 bonus to any Climbing Test where the hook or spike proves useable). The weapon is also referred to as “knee-crusher,” as it saw frequent use in the early wars that the Scythan dwarfs fought against larger foes such as trolls and ogres. The ancient dwarf blessing “May a shield be above your head, and may you strike straight” is more literal than it might first appear when it is applied to the mareka.

In ranged weaponry, Dremnin carries the magical pattern item Ozidani Carranasto, a great war bow crafted from the bones and sinews of a griffon. It’s name is in Sperethial, “to leave behind stillness.” The arrows are three to four feet long, fletched with feathers, and are thicker and heavier than conventional longbow arrows.

LP taken for stories up through “I Am An Air Sailor”; Private Journal thru 7/25/13 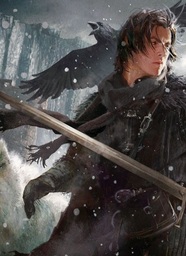