Ardor Zomay Skram is a young, tall, lean T’skrang. Even at the young age of 17 years he has taken on the look of a veteran adventurer. Although his youthful smile, a toothy grin only a T’skrang can have, can quite commonly be seen. His movements are smooth and graceful even for his kind. His thickly muscled bare arms show the scares of battle and from the whips of slavery on his medium blue skin. As with most T’skrang he does not wear shoes gaining more balance from his clawed three toed feet digging in to the dirt.

To display his wealth and status he wears two twisted wire arm bands called torques. One on his left arm made of gold that he found in the underground city made by Daren Kuyu. The other is made of silver and worn on his tail. He won this one for defending the reach from slavers. He also wears a necklace made of silver and a gold ring on each hand that he has found during his adventures.

He commonly wears bright colored loose fitting shirts and knee length pants. His wardrobe is filled with colors but favors reds and oranges. Skram often wears a fine quality blood red elven cloak with vines and leaves of green and gold embroidered into it. When he chooses to cover his head plume he wears a wide brimmed red hat with two long dark blue feathers.

Over his bright clothes he wears his armor, Ch’tards Prism. A pattern Item made of living crystal ring mail that shines with blues, purples, reds, orange, and yellow colors. His helm is an old battered open face helm made of dark steal with bronze trimmed around the edges. His friend Stilicho had it remade for him with an opening for his head plume and his jaws to stick out, it is not fancy or shiny but it is sturdy. Skram decorates his leather Items with multi-colored fish, items like his arm braces and his hammer harness.

Skram has two weapons that most people would see him carrying just passing him on the street. Like his Nial founder, the late great Han Kray Zomay, he wears a small mace head mounted on the end of his tail. Lots of T’skrang mount weapons on their tails, but Skram has the skill to make the most of it as a tail dancer. The main weapon that he carries is the War Hammer of Derin Kuyu. This is a large two-handed weapon with a double-sided steel heads. It has a long handle made of a dark wood with silver decorative rings down the shaft. Ardor Zomay S’kram was hatched to the house of Zomay 17 years ago. He is a young, upbeat, energetic T’skrang. He started training in the Zomay sword master school but found that it was not a true fit for him; something was just not right. Another member of the niall saw him practicing and knew why. Many young T’skrang grow up wanting to be a Sword Master. A rare few get to become a Tail Dancer.

Ta Zomay Osheen was to teach him the ways of the Tail Dancer. Now most tail dancers follow one of three schools. The first is to put a small blade on the tail for attacks. The second is to put a heavy piece of armor on the tail to use it as a parrying shield. The third is to put nothing on it and use the tail to grapple. Something in his blood made him make his own path, one that came from his niall founder. This did not make his teacher happy, but the family sword master school idea of placing a small mace over the end of the tail seemed to be the most effective for him.

After ascending to the first circle of Tail Dancer, S’kram had a lust for the road and decided to travel. His journey did not last long. In the second night’s camp S’kram was attacked by a slaver named Trejak. He was sold to orks to work in an elemental earth mine. He escaped with the other surviving slaves and formed the adventuring group known as “The Unchained”.

S’kram has earned several titles in his adventures. S’kram is the partial owner and Second Mate of the Dashing Stag, discoverer of the Kaer of Darren Kuyu, Quester to the passion Flouranuus, member of the troll Steel Skull Clan, friend of the Ayodmya Life Rock, Destroyer of Thera’s Pride, and member of the group “The Unchained” that returned the “Book of Tomorrow” to the Dwarven Kingdom. 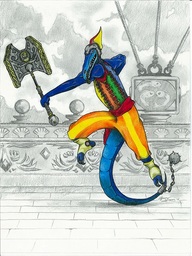